On a rainy Saturday afternoon what do you do if you want to watch something like Blade Runner but with a little more gore and, if possible, a British setting? The answer to that question is easy. You watch Split Second (1992). Have you ever seen those Photoshop images of what London would look like if the global climate actually does rise by five degrees? Nope? You know the ones where Big Ben and Westminster are sticking out of the middle of a lake and the London Eye dunks people every time it goes around. It is not the purpose of this blog to take any kind of official position in the debate over climate change. Where it is true that the vast majority of the respected scientific community is adamant that human influence has pushed global climate to a tipping point beyond which even The Day After Tomorrow (2004) looks optimistic, it is also true that movies have taught us how to survive in almost any type of post-apocalyptic world, even ones which include zombies. In this day and age popular literature, like World War Z (2006) (the book, not the movie), has thoroughly prepared us for the impending disaster of the walking dead (the actual dead, not the TV series). On the other hand if you want to experience real hopelessness and confusion about global warming read The Drowned World (1962) by J. G. Ballard. As if the flooding of cities and the destruction of the global environment wasn’t enough, what if you also had to contend with a supernatural, alien serial-killer which believes it is Satan come to take revenge on the world? You do the only thing you can do. You call Rutger Hauer, give him a gun and feed him some chocolate. 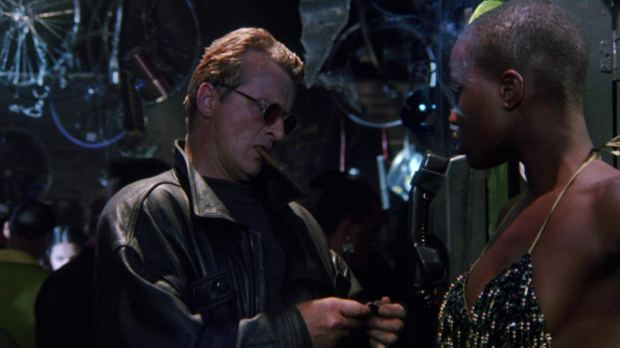 Split Second is a bat-shit insane mixture of people, places, styles, genres, themes and ideas. It is basically, and unashamedly, a monster movie with a strange science fiction setting and a lot of seemingly random dialogue tying it all together. So why watch it? Why even bother trying? Because it is the very insanity of Split Second which make it worth a visit. At one point in the movie a main character almost incomprehensibly demands “bigger fucking guns” from a dismayed police armorer through a mouthful of chocolate. This is a movie where Kim Cattrall is the love interest and about the only female character that the monster does not eat. A movie where Alistair (Neil) Duncan from the Scottish TV show Taggart plays the unwanted partner to the lead policeman. Where the lead character is addicted to cigarettes and chocolate. And where even the biggest fucking mini-gun knockoffs seem to be standard police issue. In a role which was rumoured to have been written with Harrison Ford in mind, Rutger Hauer plays an obsessed, twitching, violent and anti-social policeman who is hunting down the “thing” which killed his partner several years before. The character is clearly suffering from PTSD or some form of sugar-induced psychosis because he seems to be as much a danger to his friends and colleagues as he is to the bad guys in the movie. Why he is allowed to work as a policeman, let alone carry the biggest sidearm since Dirty Harry, is never really explained. At one point his boss played by Alun Armstrong, says he’s worked in every shithole in the world. Clearly he needs a break and the only one who seems to know this is Pete Postlethwaite. 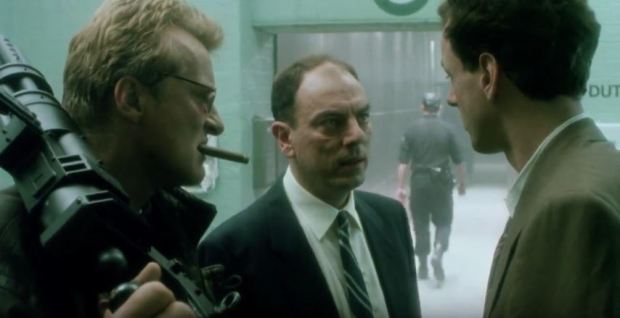 Split Second is worth a look because there aren’t any movies quite like it. Of course there are echoes of the post-apocalyptic future of things like Blade Runner. There are elements of a million other monster movies where a jump scare and gnashing teeth are just around the next corner. Split Second has a character all of its own. London is flooded and so the cast are permanently standing ankle deep in water. It rains consistently. Police vehicles are Jeeps and hovercraft. The whole thing feels like some kind of extreme version of future-noir. Mainly though it is carried along by Hauer who gives 100% in every performance no matter how insane it may be (for comparison see The Hitcher (1986), Wedlock (1991), Buffy the Vampire Slayer (1992) or Hobo with a Shotgun (2011) to name but a few). Hauer’s performance as Harley Stone (yep) is so committed to the insanity of the film you are compelled to follow along. Not surprisingly Split Second was a deeply troubled production. Constant script rewrites, no clear idea what the creature should look like until well into the production, and a change of director before the final edit. So the most important question. Is Split Second any good? Well…to be honest…no, no it isn’t. It is objectively bad. It is a cluster-fuck of ideas, images and poor taste. Why watch it? Because it is a curiosity. Because it is mostly fun and often funny. Because the actors give it their all with a crazy script. And of course because we hope at the centre of any cluster-fuck there are a few people really enjoying themselves. RIP Rutger Hauer.

If you were looking for more monster movies in the so-bad-they-are-good genre then your next stop should be Deep Rising (1998). Just need to check it off the list. Ankle deep in water – check! Portable mini-guns – check! Crazy mass murdering creature – check! Okay, great, as the poster says, “Full scream ahead.” Deep Rising has one huge advantage over Split Second, it knows it is trying to be funny. Before Stephen Sommers made Brendan Fraser the next Indiana Jones and won a Saturn Award for directing The Mummy (1999). Before he coasted with The Mummy Returns (2001), failed with Van Helsing (2004) and crashed with G.I. Joe: The Rise of Cobra (2009). Before all that he wrote and directed Deep Rising. Deep Rising gets bad reviews. Rotten Tomatoes gives it low, low scores and it had the distinction of making it onto Roger Ebert’s most hated films list. If that isn’t enough of a reason to watch it, it is hard to know what is. It is a gory action/horror film, true, but it also knowingly makes fun of the genre. John Finnegan played by Treat Williams couldn’t be more Han Solo if they gave him a battered old boat and asked him to hold it together, which he does. Famke Janssen is way too beautiful and smart to be the petty thief she is supposed to be. The rest of the cast are given deliberately cartoonish tough-guy roles and the main villain, played by Anthony Heald, couldn’t be more pantomime if he had a twirling moustache. Essentially it is a parody of Aliens (1986). A special effects action movie which managed on a budget roughly half of what Sommers would later spend on The Mummy. It is daft, fast paced, crazy nonsense.

The plot is layered but ultimately the layers don’t really matter. Finnegan and his crew have been hired by a band of mercenaries/pirates who are intending to attack a luxury cruise liner and steal everything that isn’t nailed down. What they don’t know is that the liner has already been attacked by a giant sea monster (or monsters, it is never very clear) which has eaten most of the movies extras leaving only those with speaking parts as fodder for the second act. There are twists and turns and plot reveals as we find out why the liner has been targeted, who the real villains are and why they can’t turn the engines back on. But all of this is really just to give the characters something to talk about as they run down half flooded corridors to stop being eaten by big worms with teeth.

Like Split Second the lead role was originally offered to Harrison Ford but he’s no great loss here as Treat Williams is…well…a delight as the gruff, world weary action hero who just wants to be left alone to drive his boat. He’s believably tough and occasionally amusing. It is in no small part due to Williams in the lead role that Deep Rising is even watchable. However, it is also the direction and special effects which make the film a guilty pleasure. The visual extravagance which would serve Sommers well in the Mummy films but then be taken too far in the G.I. Joe is in full effect here. Well…as full an effect as the budget allows. If you’re a fan of monster movies or even action movies with their tongue firmly in their cheek, then Deep Rising is a good way to pass 106 minutes. It won’t change your life but it may put you off an expensive cruise in the South China Sea. The biggest disappointment is that it was (perhaps jokingly) set up for a sequel which we will most likely never see. 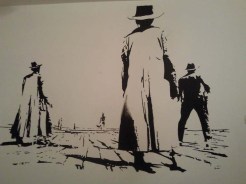