Time for a driving movie. From low budget to big budget via Tina Turner, there is the glory that is the Mad Max films. But not today. Let us assume that for a moment the cartoon crassness of The Fast and the Furious franchise is not welcome. You could refer back to a whole blog post a couple of years ago on this very site which reviewed a whole fleet of road movies. You could go back to the start of ‘The Movement’ with The Wild One (1953), or the disillusion that had set in by the end of ‘The Movement’ with Vanishing Point (1971). If you want to get that crazy feeling then Burt Reynolds offers everything from Smokey and the Bandit (1977) to The Cannonball Run (1981). Then there is Ryan O’Neal and The Driver (1978): a film so lean, it’s fantastic. But before that, there was Robert Mitchum in Thunder Road (1958), which is a stone cold classic. So whereas the US in the 50s had Mitchum and Thunder Road, the UK in the 50s had Stanley Baker and Hell Drivers. Hell Drivers (1957) is not just stone cold classic material, it is a true classic. A British-set crime-noir where lorry drivers compete for pay and bonuses by racing along the back roads of the English countryside! Baker plays Tom, an ex-convict trying to turn his back on the world of crime, but he faces violence and corruption as he runs trucks loaded with ballast between a quarry and construction sites. It is a tough, brutal film which reeks of authenticity and style. 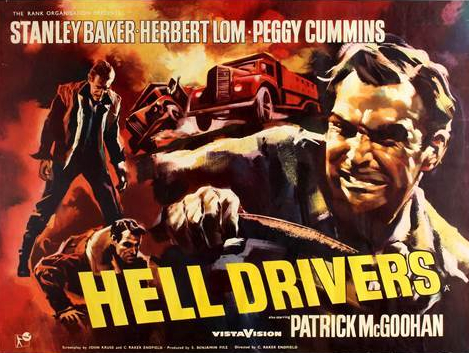 The main thing which sets it apart is the cast – with Stanley Baker in the lead role as Tom Yately. Baker was a consistent, reliable and charismatic feature of British film and television for many decades, from his initial small roles in 1949 until his last role in the Italian mini-series Orzowei, il figlio della savana. He collaborated several times with writer/director Cy Endfield. Their first was Child in the House (1956), then Hell Drivers, Sea Fury (1958), Jet Storm (1959), the fantastic Zulu (1964) – a contender for the best war film ever made – and finally Sands of the Kalahari (1965). His untimely death prevented their further collaboration in Zulu Dawn (1979) – a prequel to Zulu. But back to Hell Drivers. Look at the rest of the cast. The antagonist is played by Patrick McGoohan. MaGoohan was a BAFTA and twice Emmy Award winner. He was a TV legend due to his successes in the series Danger Man (1960-1968) and The Prisoner (1967). He twice turned down the role of James Bond. And if you only knew him from Ice Station Zebra (1968) or Escape from Alcatraz (1979), or even as the bad bastard Longshanks in Braveheart (1995), it should be enough for you to realise what an awesome screen presence he was. 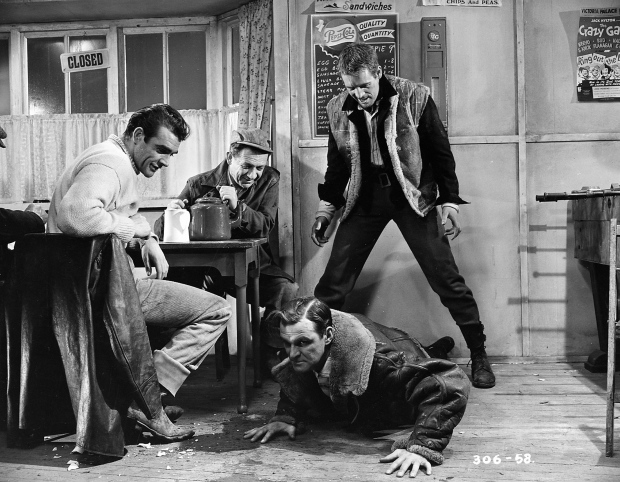 Also in Hell Drivers, there is Sean Connery. Yep, big Sean. The actual Bond. Fair enough, he doesn’t have a huge role here, but in general the quality of actors playing the other truck drivers is amazing. They include Gordon Jackson, who has appeared in loads of movies and television series such as The Professionals (1977-1983), The Great Escape (1963) and The Ipcress File (1965). Sid James, who was a mainstay of British TV comedy as well as a cornerstone of the Carry On films. Also, notably, there is Herbert Lom who was in just about everything. Seriously, check out his filmography, or alternatively, watch the Pink Panther movies. David McCallum turns up in a small role, who if you don’t know him from The Man from U.N.C.L.E. (1964-1968) or The Great Escape then you probably know him from NCIS (2003-present). The rest of the cast is populated by well-recognised British character actors of the time. For example, Marjorie Rhodes, William Hartnell (the first Dr Who), Wilfrid Lawson and Charles Lamb. In fact the entire cast seems to be made up of some kind of perfect storm of talent, stuffed full of people who are, were or would be extremely famous. Either some kind of amazing coincidence brought this kind of talent together for a small British crime noir or this is some of the best film casting ever achieved. 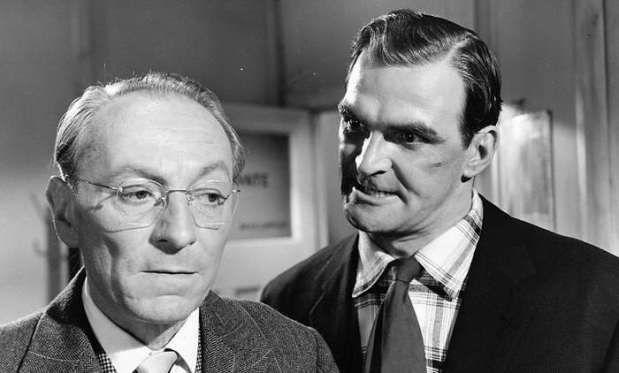 Ultimately, Hell Drivers is a crime film-noir. It has a lot of the familiar characteristics of other noir thrillers of the time such asstark lighting, working class settings and brutal and unlikable characters. But what makes Hell Drivers interesting, what grounds the characters down and gives the setting depth is the post-war world that it portrays. This is a setting that you get in most of the Bogart-era Hollywood movies and particularly in the awesome The Third Man (1949) which is set in post-war Vienna. Hell Drivers is set in and around post-war London – probably the area of mainland UK that was most devastated by the Second World War. But the devastation evident in Hell Drivers is more socio-economic than physical. After all, food rationing, including legal restrictions on the sale of meat, fruit and vegetables, was only lifted in July 1954, three years before the film was released. Tom and the other characters exist in a time of economic hardship. Jobs are limited, food is scarce, and the country is still dealing with the economic effect of hundreds of returning soldiers. This isn’t the central theme of the movie but it does provide a convincing and authentic backdrop. It is something that shows up in the little details, like for instance characters driving army surplus Jeeps, or the way some characters are dealing with wartime injuries or the absence of loved ones. Herbert Lom’s character (Gino Rossi) illustrates the new multi-culturalism that developed in the area around London in the post-war period, with Allied troops, Axis prisoners and European refugees uneasily mixing it with the local population. The whole film is steeped in time and place, and at the same time it tells an almost universal story of hardship and corruption. 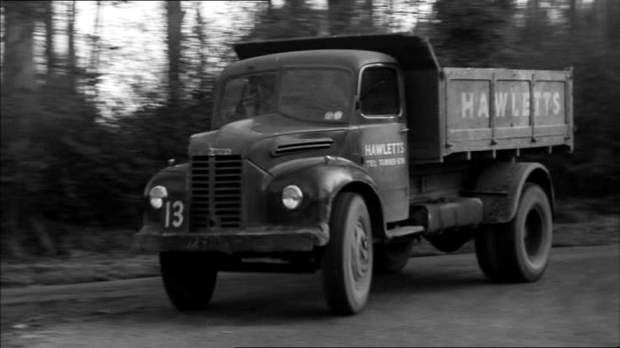 Are there good reasons to spend a quiet Saturday afternoon watching Hell Drivers? Yes, many. This is a well-acted, well-written, well-directed and compact crime thriller. It is authentically set in post–war England and has a strangely magical cast. If you are particularly into 1950s noir films it is also really entertaining. The characters are relatable and their goals are understandable. The film never really over-explains anything but it doesn’t need to. The story is classic and it hints at a wider world. By modern standards, of course, it isn’t perfect. Okay, some of the stunts and special effects sequences are a little dated when compared to what can be accomplished nowadays. But remember this isn’t Vin Diesel power-sliding a modified Dodge Charger. This is a bunch of working class guys racing fully-laden Dodge 100 “Kew” trucks across the back country roads of southern England. And besides, even the Mad Max movies use under-cranked footage. The ending is a little abrupt and perhaps some of the characters could have been fleshed out a bit more but this is all a matter of taste. The film in itself is complete. The story is complete and well-told. It is a great, entertaining action movie. What more do you want on a Saturday afternoon? 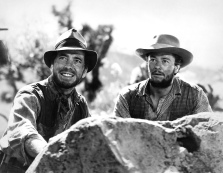 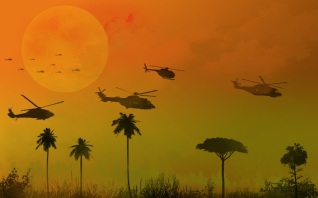 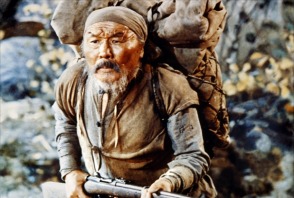 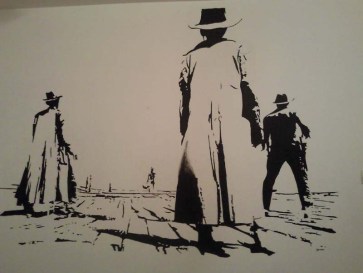