The fear, the tension, the anticipation surrounding the proposed release of Star Wars Episode VIII: The Last Jedi in December of this year is palpable. You can taste it in the air. Speculation about the plot, the quality of the production and the new direction of the canon take up more bytes on the internet than soft-core pornography. Some might say that there is good reason for fear. Mr. Mystery Box (or J. J. Abrams as he is more commonly known) left us with more questions than answers after Star Wars Episode VII: The Force Awakens (2015) because let’s face it, that’s what he does. Does anyone really care about the end of Lost? If you spend long enough telling people that you will tell them tomorrow then eventually they don’t care anymore.

The Force Awakens was great for two reasons. One, it was damn near a shot for shot remake of the original Star Wars. Two, it was not as bad as the prequels. After the initial elation of audiences surrounding it’s release it quickly became fashionable to bash it on blogs and to trash it on Twitter. The Force Awakens left a heavy burden of explanation for the films which follow it. Who are Rey’s parents? Is that even important? How can an energy blast fired from one system be seen from another and hit a third that is light-years away? Is the galaxy really that small? Who is Snoke? Is that even important? Why did Poe abandon his mission after the crash and just assume BB-8 would make it back somehow? Why was Luke hiding in Ireland? With all this to unravel, the fear that Rian Johnson, directing The Last Jedi, won’t be up to the task is very real. To give him credit, Brick (2005) was a super inventive neo-noir film and Looper (2012) wasn’t half bad for action sci-fi. However, if this short comment does not convince you, then this blog post is intended to. It will demonstrate that Star Wars (the franchise) can take anything and keep on blasting. 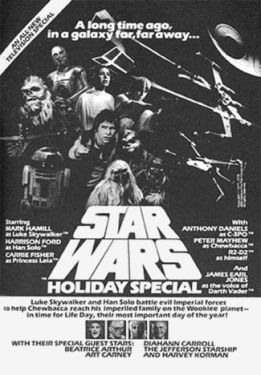 Back in 1977, before the internet, when there was only one movie and it was called Star Wars (no Roman numeral, no hope) there was only the vaguest sense of the wider universe out there. There can be no doubt that George Lucas sketched out elaborate back stories for each character and had a real sense of world-building with the Star Wars universe. However, these stories were not set in stone. Han Solo was supposed to be a green lizard for God’s sake. And if there is anyone out there who tries to convince you that Lucas had “all nine films planned out from the start” there are two words to remember – Holiday Special. The Star Wars Holiday Special (1978) was part-musical, part-science fiction, part-cartoon and part-diarrhea explosion following fourteen lagers and a spicy prawn curry. If George Lucas looks upon the original Star Wars movies as his children then the Holiday Special is a malformed idiot child which has been locked in a basement from two days after its birth and fed only discarded potato peelings. The plot is something about Han and Chewie trying to get back to see Chewie’s family in time for Christmas. At one-point Princess Leia ‘sings’ the Star Wars theme tune. And this is the movie which introduced the world to the baddest-ass in the Star Wars universe, Boba Fett. All of the key cast members are represented along with a video by Jefferson Starship (previously Jefferson Airplane and latterly Starship). Despite only being broadcast once and never getting a release on video the Holiday Special is legend. If the Star Wars universe can survive this and go on to create movie magic, then it can survive just about anything.

And so, with memories of the Holiday Special forced out of our minds like Arnie in Total Recall, we move on to the nostalgic genius of the original trilogy. From these movies, A New Hope (1977), The Empire Strikes Back (1980) and The Return of the Jedi (1983) the true legend of Star Wars was born. It is interesting that the greatest of the original trilogy, certainly the one with the most complex character development, was the one involving the least input from Lucas. And then again Jedi could be cynically thought of as a remake of A New Hope on a bigger budget. Will they ever build a Death Star without a hole in it? According to Mr. Mystery Box the answer is no, it will just be a bigger hole. With the original trilogy, it is easy to pick apart corny dialogue, derivative plots and shaky acting but that observation is weak because after all, the movies are pure entertainment. However, with our nostalgia goggles off, the original trilogy did leave us with some worrying questions. Did the Ewoks eat the Stormtroopers they killed (they were perfectly willing to cook Han and Luke)? After two battle-hardened Jedi masters, Obi Wan and Yoda, had failed to defeat Darth and the Emperor separately, was their plan really to send a half-trained, inexperienced farm boy to face them both together by lying to him? And when that didn’t work, fool him by telling him that he will not be a Jedi unless he defeats them. And if that still didn’t work, then don’t worry “there is another Skywalker”. Twenty years and that was the best they could come up with? Also, for how long were Han, Leia, Chewie and 3PO trapped in that asteroid? Almost long enough to train a Jedi it would seem. But none of this worried us at the time and do you know why? Because the movies were awesome, the toys were fun and we all wanted to be Han Solo.

One of the greatest modern science fiction movies was released in 1999. Perhaps one of the greatest science fiction action movies of all time, The Matrix. God, that was a good year! A year blemished slightly by the release of Star Wars Episode I: The Phantom Menace. Upon leaving the cinema after watching The Phantom Menace many of us felt the same worry, “there are two more of these to go.” When Attack of the Clones rolled around in 2002 it seemed like our worst fears were confirmed. Lucas should have left it alone. Much frustration has been spent explaining why the prequels are bad. Most of the second season of Spaced (1999 – 2001) is dedicated to it. One myth is that Revenge of the Sith (2005) is the best of the three. It isn’t, it is just the only one with plot elements which we care about. Taxation of trade routes……………(snore). Fans of the original movies waited twenty-eight years to see Darth Vader and Obi Wan Kenobi fight on top of a volcano. A legend which we all somehow knew when we were children. But the plot holes! Why not just take his mother with you as well? What use is the force if you can’t detect a Sith standing right in front of you? Why did Yoda go into exile when there was a war to be fought? The worst crime committed by the prequels was a lack of continuity with the original movies. Why didn’t Obi Wan remember R2-D2? How did Darth Vader know he had children? He never met them. How did Luke’s uncle know about his father? He only met him once, briefly. How come Leia remembers her mother? If Luke was trained to be almost a Jedi in a few days why did Anakin spend more then 10 years as a padawan? Someone famously said that the best art is created under the worst conditions. With unlimited budget and unrestrained imagination, Lucas very nearly proved that the opposite is true. Still, we all came back for more because despite all their faults they are indulgent entertainment. The Star Wars franchise endured.

One of the slightly disappointing aspects of Disney’s takeover of the Star Wars franchise was the loss of the extended universe which had been established over three decades in books, comics and computer games. It survives as Star Wars Legends. Presumably it survives in case Disney need to throw out yet another unexplainable Abrams-verse and return to the original canon. After all that is what Star Trek did when they ran out of older movies to crib. But it does survive and much of it is worth investigating. Truce at Bakrua is a novel by Kathy Tyers set just after Jedi and it extends the universe to include giant lizard aliens who steal souls to power their ships. The Thrawn Trilogy by Timothy Zahn picks up the story five years after Jedi and describes a resurgence of imperial power. The Dark Empire comic series, by Tom Veitch and illustrated by Cam Kennedy, deals with another galactic civil war, ten years after the formation of the New Republic. There are many stories which fill in the gaps. Classic Star Wars comics chart the years between Hope and Empire. Shadows of the Empire bridges the gap between Empire and Jedi. There is too much in the Star Wars extended universe to mention or review in one hundred blog posts, and it is not all gold. The Courtship of Princess Leia, for example, is a weird read. The existence of all this material is testament to the resilience of the Star Wars universe. Or perhaps it is testament to what happens if you give a billion fans a billion typewriters, eventually one of them will write… Rogue One.

Rogue One: The Newest Hope. Rogue One (2016), directed by Gareth Edwards, written by Chris Weitz and Tony Gilroy and based on a story by John Knoll and Gary Whitta, is one of the greatest pieces of fan-fiction that there has ever been. A story which respects the canon but is not predictable, which expands the universe but feels vital and which darkens the story but remains entertaining. If A New Hope was based on samurai movies (like The Hidden Fortress (1958)) and Dambusters (1955) then Rogue One is based on The Guns of Navarone (1961), Where Eagles Dare (1968) and a smattering of Kung Fu movies. It is the last desperate attempt against impossible odds, the million to one chance that just might work. True it is a little too dark at the beginning and the characters do not develop much but when Admiral Raddus says, “get me a hammerhead corvette” you’ll be too excited to care. A Star Wars movie which was truly aimed at fans of the original, now in their forties. If nothing else it made Darth Vader scary again. Like the Terminator but with a light-sabre. Within days of its release, in the dark corners of pubs or the darker corners of the internet people began to whisper, “better than Empire?” After the fear, the disappointment, the extended toy adverts and the complete nonsense being a Star Wars fan payed off once again. If Disney plans more ‘Star Wars Stories’ outside of the main thread then there may be some more interesting movies ahead.

One thought on “Hope for the Future – Star Wars Episode VIII: The Last Jedi Preview” 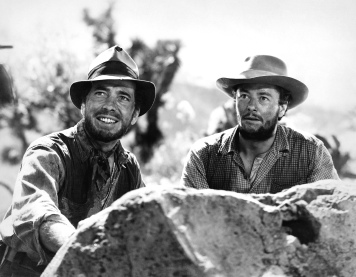