Many filmmakers have made their name by making stylised documentaries – Micheal Moore, Werner Herzog, Adam Curtis, Amy Berg, Joshua Oppenheimer, Nick Broomfield, Alex Gibney and Errol Morris are all big names that come to mind. Indeed, style derives from the individuals and can often take away from the content of their documentaries. But I do enjoy a documentary that neatly blends the director’s style with the content as long as that content is sufficiently interesting and compelling. There is often an argument to be made that documentaries can be focused too much on one idea or one opinion, and that it strives to convince you in that direction. But I guess if you are already inclined towards that opinion anyway, it makes no difference. Documentaries that are open-minded and styled as ‘flies-on-a-wall’ are usually the best (my favourite being Godfrey Reggio and Ron Fricke’s Koyaanisqatsi from 1982). But when documentaries have a compelling raison d’être and exist to either change your mind or inform you about something you really need to know, then I am all too happy to hop on board. These are films that can be about war, politics, democracy or corruption of power. Here are eight brilliant examples that I encourage you to check out (links to trailer or full feature attached).

The title of the documentary comes from the U.S. President Lyndon B. Johnson, who stated that victory in the Vietnam War required the military to win over the ‘hearts and minds’ of the Vietnamese people. Davis set out to create an anti-war film and, even though the conflict in Vietnam was coming to an end at the time of its creation, the documentary laid bare the horrors of the war as well as the hypocrisy and racism of the U.S. military. Davis draws this out with insightful talking head interviews from key politicians and military leaders played as a backdrop to horrific images and footage of the war itself. The film is quietly observant and beautifully crafted. It has a devastating impact on the viewer and for that, it is a masterpiece of documentary film-making.

Micheal Moore is now a household name thanks to the popularity of his films Bowling for Columbine, Fahrenheit 9/11 and Sicko. His somewhat confrontational style is not to everyone’s taste, but he has been nothing but consistent in his crusade against war, globalisation, aggressive capitalism and assault-gun ownership in the U.S. (his take on environmentalism is questionable though). In the late 80s, he made his directorial debut with Roger & Me, which has lost none of its impact or appeal even today. The focus is on that great American car company, General Motors, and its decision to severely cut jobs and operations at its base in Flint, Michigan. With Moore having grown up in Flint, and his father having been an employee at GM, his film is a personal attempt to capture the social devastation left behind as a result of GM’s decision. In doing so, he sets out to track down Roger Smith, the multi-millionaire owner of GM, and ask him to return to Flint to witness the decay for himself. This may be seen as a gimmicky, but Moore conducts himself with appropriate pathos and humour, and he never lets his focus shift from the fundamental issue: human greed leads to pain and suffering to those who are less-well-off. Christy Moore’s ‘Ordinary Man‘ concurs. 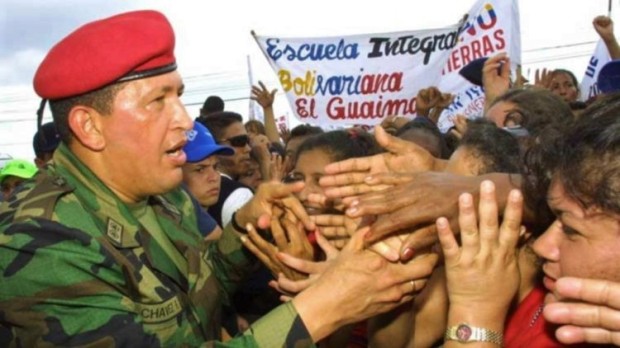 The Revolution Will Not Be Televised (Kim Bartley and Donnacha O’Briain, 2002)

Also known as Chavez: Inside the Coup, this documentary may appear to be a deliberate attempt at championing the socialist Venezuelan leader Hugo Chávez, but it all started as an accident. A troupe of Irish journalists were in Venezuela to record a short ‘fly-on-the-wall’ documentary about the rise of the current president (Chávez) when a successful coup d’état was carried out against him. The documentary followed the coup as it happened, with the film-makers having access to Chávez’s inner circle as well as being on the streets as violence erupts. There is footage of the ‘El Silencio Massacre’ where several civilians were killed or injured. Private media run by Chávez opponents attempted to use footage to argue that pro-government supporters were responsible, but the documentary clearly highlights this as a deception. This event, and others important to understanding the coup, are shown unadulterated by the film-makers. It contrasts significantly to the narrative transposed by anti-Chávez factions such as the White House. And this is why the film is a hugely important historical document. There is enough presented here to show Chávez up as a flawed leader, but it pales in comparison to the deeply evil traits that permeate within anti-socialist, pro-capitalist agendas. 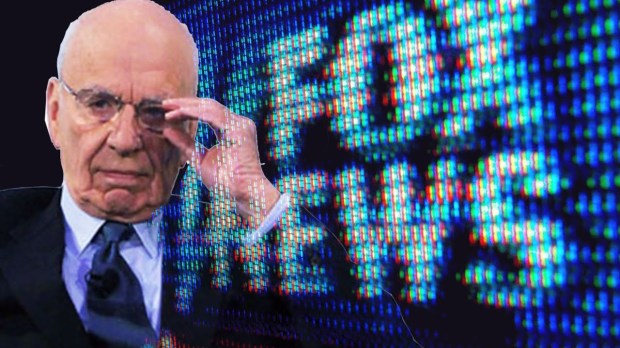 Not exactly the most stylish of documentaries, but this is a film that is more about the content than the style. It is one of those low-budget internet documentaries from the early noughties, when opposition to the Bush administration and the Iraq War was reaching its peak. The film is not so much about Bush, but more about how Rupert Murdoch’s Fox News aided in getting him elected in the first place. The primary focus is on the downfall of unbiased journalism and the pitiful ‘race to the bottom’ in television news. There are a number of interviews with ex-Fox News presenters and employees who open up about the extreme right wing direction that the network is instructed to take. It all points to a sadistic, megalomaniac owner who has utilised his media empire to stupefy his audience and consolidate ultimate power. The film is insightful and deeply shocking. It is amazing to think that this was 16 years ago, and we are now seeing Fox News going from strength to strength thanks to the U.S. President’s parroting of the network on his Twitter feed.

Morris single-handedly launched the ‘impact documentary’ with his hugely influential film The Thin Blue Line in 1988. In his career, he has either made documentaries about weird and eccentric subjects or documentaries about U.S. political power and intrigue.  These include two semi-biographical documentaries about very powerful men involved in shaping war policy in the U.S. – The Fog of War (Robert McNamara) and The Unknown Known (Donald Rumsfeld). But arguably his most serious and impactful film is Standard Operating Procedure, an investigation into the infamous Abu Ghraib scandal. Here, he intimately interviews military personnel and Iraqi prisoners about what occurred at the jail in late 2003, after which shocking pictures of torture and abuse of the prisoners held there emerged. Like many documentaries about the Iraq War, Morris’s film forces the viewer to question the ‘shock and awe’ tactics imposed by the Bush Administration and it exposes the rife corruption of morals and ethics at the heart of the U.S. military.

The genesis for this documentary is thus: an amateur Palestinian film-maker, who lives in the West Bank territory, decides to document the life of his newly born son as he grows up. Their little village is in the process of being barricaded by the Israeli Army so as to make way for a new Jewish Settlement. The troubles around his village intensify as the inhabitants and pro-Palestinian activists protest the illegal incursion and destruction of agricultural land. The film-maker, Emad Burnat, attempts to documents the sometimes brutal events that unfold, but his cameras are constantly broken by the Israeli forces. Luckily, the footage from the cameras could be salvaged, and the result is this powerful and meaningful documentary. The film is indeed a work of political activism, but it is so much more than that. The power of the individual and the power of the camera combine as one to create a compelling, fact-based narrative about the violence that occurs on the Palestinian and Israeli frontiers.

Like with The Revolution Will Not Be Televised, Winter on Fire began as a simple filming of a non-violent student protest in Kiev in 2014. The protest was against the oppressive and Russian-aligned Ukrainian Presidency of Viktor Yanukovych. The protest quickly spirals out of control as riot police attempt to brutally quash the dissent. This leads to an immediate retaliation. The student movement is supported by a number of violent factions, who cause havoc and destruction on the streets throughout the cold months ahead. Afineevsky’s camera brings us down into the streets as the place is turned into a war zone. It is a terrifying and hellish glimpse of history unfolding before our eyes. But there is much bravery and passion demonstrated in the actions of the protestors who feel unbound by the despicable reaction of the Government. In the end, the President is ousted, and the viewer feels grateful that cameras were there to capture it all. 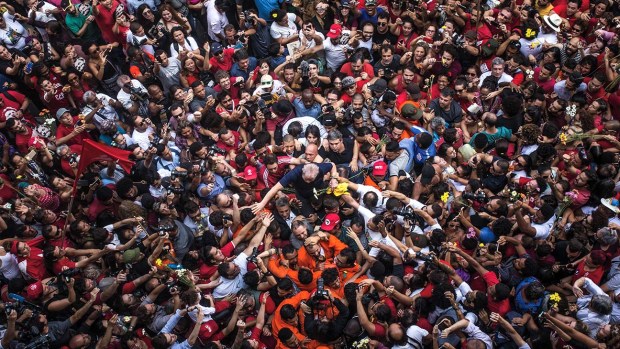 Petra Costa’s brilliant documentary does not account for the election of the far-right buffoon Jair Bolsonaro to the Brazilian Presidency in 2018, but it does cover the troubling lead-up to it. Costa lays out her own personal affinity with the pro-democracy Worker’s Party movement at the beginning of the film. The leader of the Worker’s Party,  the hugely popular Luiz Inácio ‘Lula’ da Silva, was elected to power in 2002 and allegedly lifted Brazil out of poverty in that decade. In 2010, he passed the baton onto Dilma Rousseff, herself a former guerilla fighter against the Brazilian military dictatorship of the 1970s and 80s. The documentary presents access to both Lula and Rousseff from 2014 and 2015 as they faced investigations of corruption and involvement with oil and gas companies. Rousseff is ultimately impeached and this paves the way for a populist, right wing take-over of Brazilian power. The remarkable point of the film is that Brazil, a country that is relatively new to democracy, is still terribly divided in terms of rich and poor, capitalism and socialism, facts and lies. Its comparison with the current state of affairs in the U.S. could not be more obvious.