The Irish Times recently listed out the 50 greatest Irish films ever made. There were controversies of course. Barry Lyndon topping the list confused many, not least because it was directed by an American and based on a novel by a British writer. Sure, the story focuses on an Irishman (albeit an Anglo-Irishman) and much of the first half of the film is set and shot in Ireland. But still, it is a bit of a stretch to say it is the ‘best Irish film of all time’. The inclusions of Yorgas Lanthimos’s recent films (The Lobster and The Killing of a Sacred Deer), brilliant though they are, are also an odd choice given their less-than-obvious connection with the country. But I am glad to see many of the films I would highly rate make the list too: The Dead (John Huston’s beautiful interpretation of Joyce’s story), Man of Aran (a docu-fiction shot on the Aran Islands in the 1930s), Hunger (an unexpected and powerful take on the Maze hunger strike) Adam & Paul (an alternative Joycean odyssey of Dublin), Odd Man Out (James Mason as an IRA fugitive in the 1940s) and Garage (a tragic-comic masterpiece set in a very recognisable rural Ireland). And here are ten others that should have made the list too:

Conor McPherson has rightly earned the status as one of the best contemporary playwrights in Ireland. He started out writing plays at a young age, and often lent his considerable writing skills to screenplays, I Went Down being the first of those in 1997. Commissioned and funded by the Irish Film Board, RTÉ and BBC, it was a moderate success at the time of its release. Directed by Paddy Breathnach and starring the rising great of Irish cinema, Brendan Gleeson, along with a host of recognisable Irish actors, the film follows two low-grade criminals who are hired by a crime boss to drive across the country and escort one of his associates back to Dublin. It is a typical ‘buddy film’ full of intriguing plot twists and has a wonderful witty script. Gleeson is just fantastic as the clownish but heartfelt Bunny Kelly. 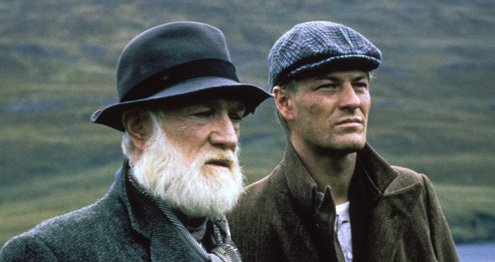 Riding on the success of his Oscar-triumphing My Left Foot, the master of Irish cinema, Jim Sheridan, tackled the iconic John B. Keane play The Field for the Big Screen in 1990. For reasons I don’t fully comprehend, The Field is not as highly regarded by critics as Sheridan’s other films. And yet it is hugely powerful with a seismic narrative and truly astonishing performances by Richard Harris and John Hurt. The scene is set in an Ireland of yesteryear, but regardless of how dated it may feel, it is pure cinema of the highest order. Killary Harbour in Connemara is a sumptuous backdrop in Jack Conroy’s photography, while Elmer Bernstein sets the tone with a masterful score. Sean Bean could have worked on his accent a bit more, but he still delivers on the unforgettable role as the ‘Bull’ McCabe’s son Tadhg. There is really nothing forgettable about this film at all.

Sheridan again, and this time exploiting the extraordinary talent of Irish-based super-actor Daniel Day Lewis (sure he may as well be Irish). Day Lewis plays the heart-wrenching role of Gerry Conlon, a Belfast man wrongly convicted of a bombing in London in the 1970s. The true story of the ‘Guildford Four’ has a needle-focus on Conlon’s plight, and it is in his evolving relationship with his father Giuseppe (played by the awe-inspiring Pete Postlethwaite) that provides an unflinching core to the film. Given its raw connection to the Troubles and the terrible affliction that the war had on families in Northern Ireland, the timing of the film’s release in 1993 (when talk about peace was reaching fever pitch), proved very poignant indeed. 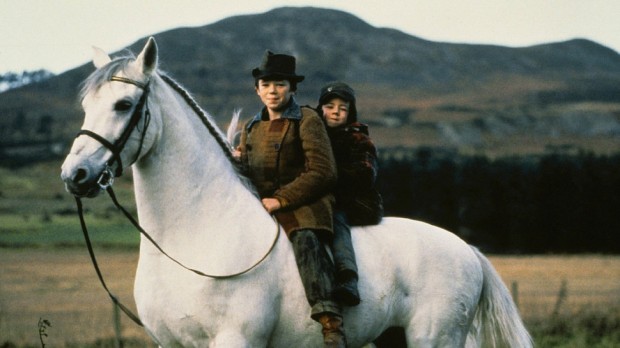 After watching this film as a kid, I attempted to live out the adventure of two kids riding across the country in search of a mystical land called ‘Tír na nÓg’. I didn’t get too far, but such was the power of this Irish treasure, I wanted to believe in it. It is somewhat of a harsh story for a child, but at the same time it has a lovely fairytale feel to it. Not only do we have Gabriel Byrne and Ellen Barkin giving fantastic performances as Irish Travellers, but the legends Colm Meaney and Brendan Gleeson are all involved as minor characters. The two youngsters, Ciarán Fitzgerald and Rúaidhrí Conroy, as Ossie and Tito are brilliant too. Their quest from the Ballymun flats in Dublin to the Midlands is truly memorable. 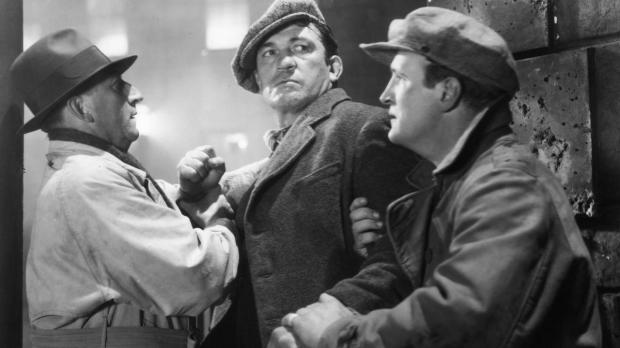 Long before The Wind that Shakes the Barley another brilliant dramatic film marked the 1920s Irish War of Independence. Directed by none other than John Ford, himself an Irish descendant, The Informer was made in 1935, when Ford had hit the ranks of Hollywood’s chief filmmaker. The film was based on a novel by the great socialist Irish writer, Liam O’Flaherty, and it had originally been adapted for a 1929 British film. Ford’s adaptation raised the stakes in quality and reverence, earning four Oscars that year. The plot concerns the actions of an ex-IRA member, Gypo Nolan, who betrays a comrade for a financial reward so he can immigrate to the U.S. for a better life with his belle. Victor McLaglen, an actual British heavyweight boxing champion, gives an unforgettable performance as the conflicted and dim-witted Nolan. The film was not filmed in Ireland but it stars many Irish actors, is a genuine Irish story and gives a very believable sense of place with its Dublin setting. It is unsurprising that the film was heavily censored upon its British release due to the Black and Tans’ accurate portrayal as violent thugs! 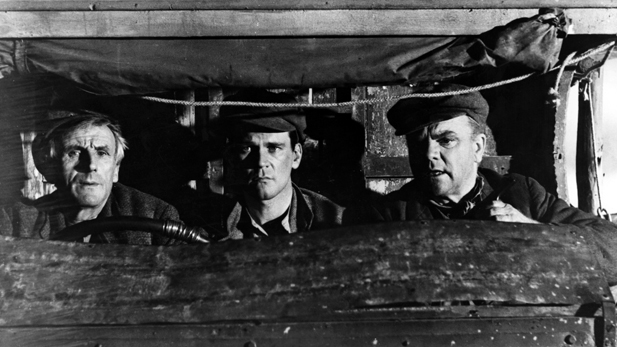 Hollywood’s United Artists actually came to Dublin and Wicklow in the 1950s to make a film about the Irish War of Independence and the ensuing civil war. Like The Informer, it was adapted from an earlier novel, this one being from 1933 by Reardon Conner. The production was strongly backed by its central star Jimmy Cagney, who like John Ford was descended from Ireland. Cagney undertook the role of a blood-thirsty IRA leader who pulsates with a passionate nationalism as well as a cold and calculated violence against anyone who stands in the way of a fully independent Ireland. It is a remarkable film for the time as it clearly denounces the blind and reckless violence that led on from the War of Independence. Cagney as the show-stopping Hollywood star does not shame himself with a bad Irish accent either. The film also sees a Brando-esque performance from rising star Richard Harris – himself a Limerick-born man.

The Jim Sheridan/Daniel Day Lewis collaboration continued throughout the 1990s with this often overlooked but equally powerful story about an ex-IRA man who, upon leaving prison, takes on boxing as way of getting his life in order. Not so easy when the organisation you were in don’t really see ‘ex-IRA’ as a thing! It was filmed in Dublin but set in present-day Belfast, where sectarian violence and debilitating suspicion are rampant amongst its inhabitants. Sheridan draws inspiring performances from Day Lewis and Emily Watson, while Brian Cox and Gerard McSorley maintains the high standard in support. Not surprisingly, Day Lewis trained as a boxer for three years before the film was shot, and ‘The Clones Cyclone’ Barry McGuigan was his trainer. Authenticity doesn’t come closer!

Described as the ‘First Irish Feature Film’ on its poster (meaning it was the first film to be made exclusively from Irish-based funding), Poitín is a remarkable little film spoken entirely as Gaeilge (in Irish). It was shot in that beautiful part of the world, Connemara, and starred the late great Cyril Cusack. The story concerns a man living in a small cottage with his daughter and who makes a living distilling that coveted but illegal potato-based alcoholic drop, poitín. The film was made by Bob Quinn, a self-styled ‘anti-colonialist’ filmmaker. Renowned for making films set in rural Ireland, there is never an overt political stance emanating from his work but rather he elevates the ‘Irishness’ of his characters and settings and it’s not always a romantic nicety (not unlike the plays of J.M. Synge or John B. Keane). Poitín, and an earlier film Lament for Art O’Leary, are the best cases in point. 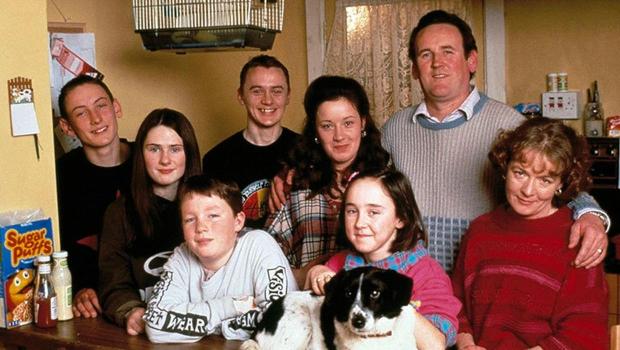 The Commitments rightly gets all the plaudits for a popular Irish film in the 1990s. Along with the Oscar triumphs for My Left Foot in 1989, it had a monumental effect for Irish cinema around the world. It also excelled the global popularity of Roddy Doyle’s masterful comic writing. As many of you know, The Commitments was the first in Doyle’s Barrytown Trilogy, with The Snapper and The Van following after its release in 1987. No surprise then that both The Snapper and The Van were also adapted into popular movies. I think The Snapper makes as much an impression on the consciousness of Irish people growing up in the 1990s as The Commitments does (although it is very much a film about Dublin City). It centres on a young woman who accidently gets pregnant with a man the same age as her father and whom she loathes. Whereas Tina Kellegher is brilliant as the lead, Colm Meaney’s role as her foul-mouthed, no nonsense but deeply loving father is the stuff of legend. A comedy for the ages.

A little known film that many critics have remarked upon as being the first to enliven the modern Irish film industry. The composer and screenwriter Robert Wynne-Simmons concocted an excellent magical fantasy horror with little or no money – the funding he received from the Arts Council of Ireland enabled him to present it at film festivals around the world. Set in a sodden, destitute part of Ireland in the early 19th Century, a young woman is treated hideously by the community due to her perceived peculiar nature. When she falls for a gruff older man called Scarf Michael (played by the legendary Mick Lally), who likes to play the fiddle and appears to have genuine magical powers, she discovers her destiny. A dreamlike and enthralling gem of a film that oozes with authenticity and originality. No wonder some have drawn parallels with Robert Eggers much-acclaimed recent horror The Witch.

One thought on “Best Irish Films Ever Made – The Complimentary List”