And we’re not little children. And we know what we want. And the future is certain. Give us time to work it out.

David Byrne has always struck me as a wacky guy but with an extraordinary talent for music. This is epitomised by the music video for Talking Heads’ Once in a Lifetime, where the bespectacled and dickie-bowed lead-man throws shapes at the screen while mouthing the lyrics to an incredibly catchy song. As one would say, he seems to be ‘on the spectrum’…and I like that. It wasn’t until relatively recently that I started to listen to Talking Heads more, mainly because Byrne began to appear more and more in things that I engaged with – in particular, a candid interview on BBC Radio’s Desert Island Discs where he explained some of his upbringing, his influences and his thoughts on current affairs. Then I watched Stop Making Sense for the first time and I was totally engrossed by this man. American Utopia can be seen as a spiritual sequel to that ground-breaking 1984 concert film (directed by Jonathan Demme). While it is that, it is also so much more.

The film is essentially a live recording of Byrne (not of Talking Heads anymore) and a number of international artists performing songs from his most recent album American Utopia, as well as many other recognisable tunes, on Broadway. The setting is fairly intimate (small stage, thousand or so in the audience), and the performance is carefully choreographed. Everyone is in their feet, wears a grey suit and looks pretty cool. There is no set design and all instruments are completely wireless. Spike Lee controls the cameras, and adds some trademark editing flair here and there but you would never know it was ‘A Spike Lee Joint’ until the credits roll. This is very much David Byrne’s work.

The energy exuded by the musicians, led by the irrepressible and expressive Mr Byrne, encaptivates the viewer, as it does the audience who often rush to their feet to applaud the extraordinary show taking place in front of them. The music is joyous and gratifying, but the thrust of what is said is equally as important. Byrne, in his matter-of-fact North American accent, speaks many truths in-between songs. There are some funny anecdotes and titbits about his music and the musicians on stage beside him. He also makes an odd mention about the state of affairs in the US – this was filmed when the country was experiencing the final dark days of Trump. Some would say this is out of place in a music film, but I don’t agree. I am sure all Americans have been affected in some way or another by the shocking course of events that has occurred there in recent times. The musicians give a rousing salute to those American minorities who lost their lives to police brutality via a version of Janelle Monáe’s Hell You Talmbout, which is relevant, timely and deeply forceful.

Reflections on badness quickly gives way to joy and vibrancy, as we are treated to some favourite Heads’ songs at the end. Byrne’s wacky body expressions never lets up – even as the end credits roll, he leaves the stage, pops on his helmet and Go-Pro, and hops on his bike before cruising around New York with the rest of the band! The film is truly life-affirming, and is possibly one of the greatest concert films ever made – for me, it’s up there with The Last Waltz.

We maybe all on a road to nowhere, but with the future in our hands we can make that road go anywhere. 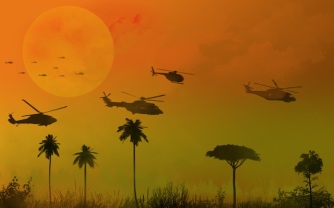