During his career, Aaron Sorkin has honed a confident style in writing screenplays for Oscar-expectant films. From A Few Good Men to The Social Network, he’s been pounding out quality scripts for Hollywood over the past three decades. Only recently has he started directing, and with this latest offering about the fallout of the riots at the Democratic National Convention in 1968, he’s hit a crowd-pleasing winner. Although the opening credits are a little disjointed – cramming in a re-cap of events leading up to the Chicago riots with historical footage and weirdly upbeat music, it just doesn’t sit well together. However, the film evolves into a compelling courtroom drama, and who doesn’t love those? The casting is pitch-perfect – there are heroes, villains, clowns, geeks and lots of redemptive figures. Although the film is based on actual events, Sorkin manages a tone that navigates between funny, serious and deeply harrowing.

Lots of plaudits have gone the way of Sacha Baron Cohen and Eddie Redmayne in their respective portrayals of Abbie Hoffman and Tom Hayden (and remember these are British actors), but the entire main cast impress. Mark Rylance and Joseph Gordon-Levitt, as defense and prosecuting attorneys, are unsurprisingly in control, while the veteran Frank Langella pulls no punches in his portrayal of a truly awful and appalling judge. I will admit that the film feels more established for entertainment’s sake and all of the actors are in on this. But after Vice a few years ago, and the way that film half-parodied the factual material while simultaneously presenting the deeply, disturbing facts about how modern politics is enacted, there is something to be grateful in the way historical films are presented in this way. A touch of humour here and there makes things more digestible, I think. And anyway, there are lots of books written on these events, so you can always access them for fact-checking afterwards.

The film is not a documentary nor does it intend to be. It takes artistic license to history, and many detractors will point out that this takes away from the actual events. But there is an astonishing power delivered in the story as a whole, and in general this all fits in well with what actually happened, or at least with what the outcomes were. Of more significance, the film resonates with many things that have happened in the US in the past few years. It is unsurprising to learn that Sorkin decided to enhance some of the focus around the riots and the police brutality when current events such as the murders of George Floyd and Breonna Taylor made headlines around the world. There are times when you just want to shout at the screen in disgust when the ugly, racist face of the US justice system is exposed. In the end, all of this matters and the film, although out to win some awards, is entirely aware of that and allows the viewer the opportunity to take it all in.

After the opening five minutes, and having considered the film’s title, you would be forgiven for expecting a movie about heavy metal music. Indeed it’s not. This is very much a movie about internal, personal struggles and dealing with a disability; in this case, losing one’s hearing. Riz Ahmed plays Ruben, a drummer in a metal duo called Blackgammon. Together with his musical partner and girlfriend, they travel around the US in their specially-sound-designed recreation vehicle. Their world comes crashing down when Ruben starts to go deaf, likely as a result of prolonged exposure to high decibels of music. It is clear that Ruben’s past has not been easy. We learn he is a recovering heroin addict, and his general demeanour is uneasy and temperamental, which is exacerbated by this sudden and devastating event.

The film is pretty deep and exploratory as you would expect, but you are never overwhelmed by emotion, which is often the case with films like this. This is primarily down to the amazing central performance by Ahmed. Never giving anything away too easily, Ruben oscillates between simmering anger and pragmatic warmth. Throughout the events of the story, he is completely in denial over his fate, but underneath the surface, he is endowed with a deep sense of humility – and the battle that is pitched as a result forms the central focus of the film. Ahmed, in his acting, handles that struggle immensely well. Having a British-Pakistani actor play this role (Ruben is American through and through) makes for an intriguing set-up. I have always enjoyed everything that Ahmed has done (from Four Lions to Rogue One) and even though his rise has been slow, I think this is him at his most accomplished.

One of the most remarkable things about the film is that it attempts to immerse the viewer by adjusting the sound now and again to give the impression that we are hearing what Ruben is hearing. It is disconcerting, deliberate and often effective. There is also an impressive commitment to sign language, or more precisely the art of learning and embracing it. The film on a whole does have its drawbacks however. For one, there is little else going on besides the character of Ruben. His partner, played by Olivia Cooke, is important to the story but she is never given enough time to expand as a character. Paul Raci as a Vietnam Vet who runs a school for the deaf, provides some intense and moving one-on-one scenes with Ruben, but this is an exception. There are long, overly contemplative scenes that could be filled with more meaningful material. It is clear from the outset that this is one of those ‘human affliction and self-discovery’ treatises, and apart from Riz Ahmed’s truly nuanced performance, we never go beyond that expected experience. But don’t let that put you off. It is absolutely watchable. 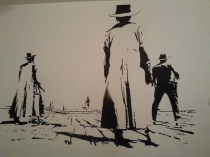