Inspired by current world events i.e. the full disintegration into oblivion of the American intellect, I have decided to focus my first blog post on the obsession between movies and the end of the world. Things are going to get a bit Book of Revelation…

Halfway through Adam Curtis’s mind-blowing documentary on the current socio-political turmoil in the world, Hypernormalisation, there is a montage from Hollywood apocalypse movies. The montage segues from one dramatic scene to another with prolonged gasping effect…the White House is destroyed in Independence Day, a giant dino-creature chucks cars about the streets of New York in Godzilla and a giant comet looms over North America in Deep Impact. As Curtis’ text then remarks, all of these films were produced before 2001. He then follows with a shot of the second plane crashing into the Twin Towers on September 11th that year.

Indeed, there have been many Hollywood disaster movies made since – it’s big business after all! But no one had ever expected an actual world event to so vividly reflect the type of exaggerated content seen in movies in the years leading up to this as it did. The series of documentaries that were constructed out of amateur footage from 9/11 has prompted many viewers to chillingly comment that they felt like they were watching a ‘disaster movie’. I am left in no doubt that although these viewers were horrified by the ‘live’ spectacle of cataclysmic death and destruction, they could not avert their gaze from the screens. Hence, and unsurprisingly, a few years later, the entertainment industry formulated a film dramatising the events – remember World Trade Center? Yeah, I don’t really either. But the fascination with 9/11 as a witnessed spectacle has persisted in movie studios and in the minds of their ‘disaster’ directors ever since and the summer blockbuster season is never without at least one example every year now (Pacific Rim anyone?). 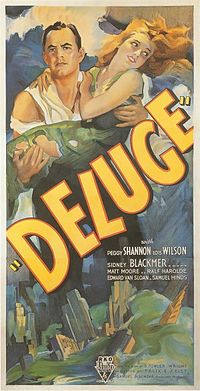 Hollywood has focused on ‘the end of the world’ as a concept for generating profits right from its early days. Deluge was an apocalyptic hit for RKO Radio Pictures in 1933 – it depicted the destruction of New York by a tsunami (it was quite good but unfortunately, it later inspired The Day After Tomorrow). In the 50s, things started to get serious and studios competed for the biggest and best Armageddon film, no doubt perpetuated by the US public paranoia over the Cold War and the perceived rise of communism. As more of the public flocked to the local drive-ins or theatres to be shocked and awed, more money became available to the studios and significantly, special effects started to improve and further impress audiences. Some of the most memorable of these include The Day the Earth Stood Still, On the Beach and Invasion of the Body Snatchers. These particular examples had intelligible storylines and even provided veritable anti-war subtexts that still impress to this day – but I guess what moron would want more war after WWII, right?…(tumbleweed rolls by)…

Alternatively though, there was a rise in the exploitative, low budget b-movie standard that continued into the 60s. Apocalyptic visions such as Panic in Year Zero!, This Is Not a Test and The Lost Missile likely perpetuated the mood of ‘us vs them’, not only in the US but right around the western world. The ‘end of the world’ agenda in Hollywood also in some instances turned to weirdness (The Creation of the Humanoids), farce (The Bed-Sitting Room) and just outright ridiculousness (Crack in the World). But the credibility circuit was carefully wired in the genre in the late 60s by a few who had been inspired by Don Siegel’s Body Snatchers and Richard Matheson’s ground-breaking novel I Am Legend. There was a notable movement for taking cinematics to new uncharted waters, while simultaneously quenching the film industry’s ‘thirst for the bizarre’. George A. Romero, for example, offered Night of the Living Dead to audiences in 1968, putting the apocalypse in the capable but patchily skinned hands of the walking dead. The massive success of this film enabled a swathe of sequels that still continues, unashamedly, to this day. We await the possibility of ‘Night of the Dead Ape Planet’ with barely contained excitement.

With the successes of Dead, Planet of the Apes and even the otherworldly masterpiece 2001: A Space Odyssey (not really apocalyptic but…), the floodgates opened up for sci-fi apocalypse adventure stories to spread across the globe and into the zeitgeist. The list of memorable cinematic moments offered in this canon drifts on and on – a cat-loving Peter Ustinov rambling about existence in Logan’s Run, Sean Connery trying to evade a giant flying stone head whilst wearing a nappy in Zardoz, Brad Pitt doing the twitchy, crazy thing in 12 Monkeys, Bruno Lawrence as the only survivor of a nuclear holocaust addressing an audience of cardboard cut-out famous people in The Quiet Earth. There is no doubt that many great films have been created concerning potential doomsday scenarios or post-apocalyptic worlds, some supplanting messages of hope (Nausicaa of the Valley of the Wind), others incorporating an element of satire (Mars Attacks), hilarity (Idiocracy) or light-heartedness (Wall-E), and some just admirably-crafted (28 Days Later, Mad Max, The Terminator).

But there’s also the deluge of relentless shite in the genre. I intend to return to the specific topic of Roland Emmerich’s movies at a later stage but suffice to say here that I see him as being the major culprit in the current Hollywood pack of doomsayer directors/producers who offer a message of negativity and conservatism that in turn coaxes a certain disposition of narrow-mindedness and anti-intellectualism in the viewer. Just saying…and just to point out a selection of his filmography if you aren’t familiar – he directed Godzilla, Independence Day, Eight Legged Freaks, The Day After Tomorrow, 2012, 10,000 BC, White House Down and Independence Day: Resurgence (as if we needed any resurgence after the original cack!). See the thing I find is that, not only are these movies filled with non-acting roles that perpetuate stereotypes, they are also over-pumped with explosive visual effects that, in any other context would possibly appear impressive but when presented with a complete lack of reality and slathered on thick with a helping of clichéd dialogue, they actually come across as if a three year old’s incomprehensible scribblings may have been considered as the source material for the script.

The downside to all of this for me is that people lap it up, big time! In 2014, Transformers: Age of Extinction (by the unlovable Michael Bay) grossed over US$1 billion at the world box office – a quadruple multiple of how much it cost. Independence Day: Resurgence, although mostly fouled with excrement by the mouths of the critics, financially done ok too. Indeed, there is a big argument to be made that blockbusters of this ilk, i.e. mindless crap about the world in crisis, are increasingly pushing their product on the Asian market, mostly China, and are therefore taking in another gigantic stream of profit. Is this opportunism in sourcing a relevant alternative audience or just a cynical exercise in the exploitation of a population who are used to being under the sharp control of a restrictive and largely undemocratic government? But let’s not get political.

Original apocalyptic films are in their own right a phenomenon of the mid-20th Century when the power of the on-screen image was fresh and formidable. In the current climate of movie-going, I find the genre to be jarringly contrived (well I could say that about many genres in fact) and troublingly filled with a relentless fuck-load of zombies (nice one Romero!). Although the odd expensively-made blockbuster such as World War Z or the latest Mad Max offering (wasn’t Fury Road awesome?) can offer something entertaining, watchable and appropriately challenging these days, I have essentially given up on believing that such movies can ever offer us a plausible image of the actual ‘end of the world’, if indeed we really want to see it or if it will ever really happen….oh yeah, I almost forgot. The US just elected Donald Trump as president didn’t they? 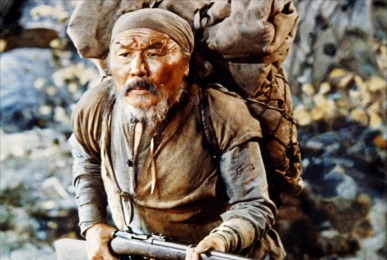 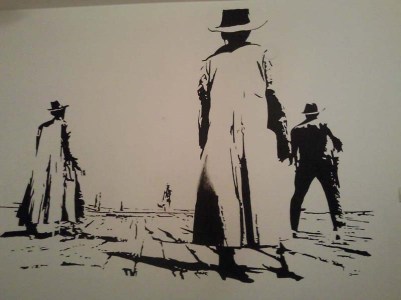