The biting political and social satire of Armando Iannucci has struck a chord with many viewers from his breakthrough with The Day Today in the early 90s through to his magnificent series The Thick of It, which offered us one of the greatest characters of all time in Malcolm Tucker, played by Peter Capaldi, and its weaker but no-less-hilarious American cousin, Veep. His previous venture into film has only been with In the Loop, a spin-off from The Thick of It, which along with Capaldi’s genius, gave us a wonderful turn by James Gandolfini as the US Lieutenant General. Iannucci’s ability to write and direct previously unthought-of levels of satire is masterful. He savages those in power with hilarious and effective dialogue and narratives, The Death of Stalin being his latest example.

The Death of Stalin revolves around the drama, absurdity and often secretive moments of the internal power struggles that was prompted after the Soviet ‘General Secretary’ popped his clogs in 1953. The film has unsurprisingly been banned in Russia and other Russian-aligned puppet countries, with the Russian Ministry of Culture hilariously stating that the film was evidence that there was a ‘western plot to destabilise Russia by causing rifts in society.’ Maybe Iannucci needs to make a satire about the reaction to his film! I think if you haven’t seen it yet, all this backlash just gives you a clear indication of what to expect, and why you should watch it. It is a big gigantic laugh at the expense of fusty, old, lunatic power-huggers who gladly (and evilly) wield their arm over the masses with no sense of their responsibility to humanity, and who do not know what they are actually doing. Indeed, considering the timing, Iannucci is not just pointing the finger at Russia. He has already put the spotlight firmly on the ridiculous nature of British and America politics in the past, so it would be no surprise to find allusions to the current turmoil at Westminster or Capitol Hill too. 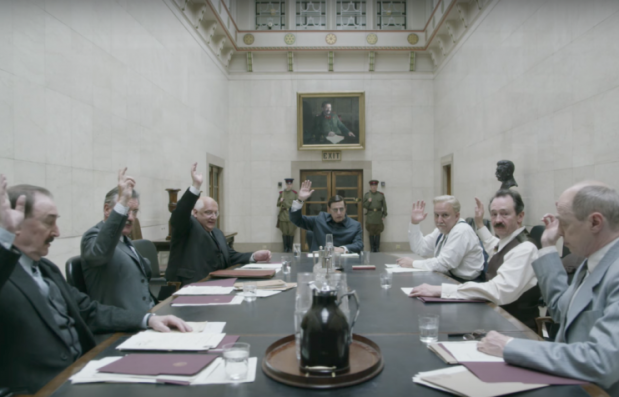 Now one should not expect any great, previously unknown truths to be garnered from The Death of Stalin, but if you have no idea of the history, then don’t not expect to come away with some insight either. The film may be played primarily for laughs but it also deals with actual events in a way that sometimes feels dark and heavy (the inexplicable assassinations of Stalin’s enemies is shown mercilessly, as too are the killings of thousands of mourners who attempt to cross the barricades at Stalin’s funeral). Although historical accuracy has been questioned by some, there is much believability in the cold, cruel and fear-instilled final days of Stalinism being presented. And we see this mainly in the settings (Kiev in the Ukraine was utilised for outdoor locations), and impeccable costumes (Isaacs’ Field Marshall uniform is extraordinary). Iannucci also cleverly supplants relative lookalikes in the main acting roles (Buscemi as Khrushchev, Simon Russell Beale brilliant as Beria, Jeffrey Tambor as the weakling Malenkov and Andrea Riseborough as Stalin’s daughter, Svetlana), and he also allows the actor’s own accents to be maintained for continuity, for appeal to a Western audience, and most importantly for comedic effect, which absolutely works! The delivery of lines may have been very different to what had been spoken in reality but I think we can all get the gist if lines such as ‘what in the barrelling fuck?’ is used instead of ‘excuse me?’ 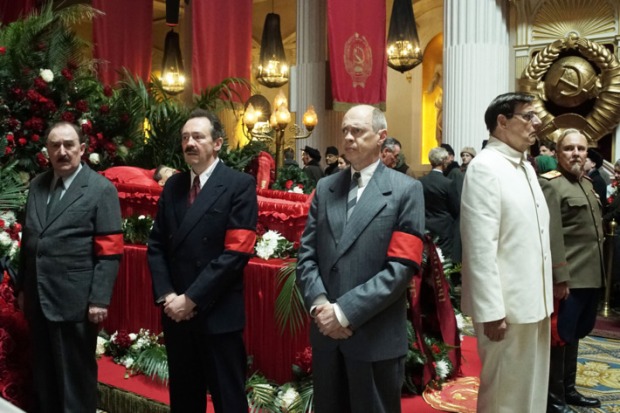 The film is based on comic books – not exactly the history books (which have likely been compromised over the years anyway). But the general idea of events is communicated well enough for us to know and understand that we are based in Moscow in 1953 and are dealing with the fallout and grubby scramble for power after Stalin’s death. It is definitely worth a watch, if only to see Monty Python legend Micheal Palin cause a petulant tiff over the invitation of some bishops to Stalin’s funeral.

English director Alex Garland bases this sci-fi horror on a recent novel by Jeff VanderMeer, which itself is part of a series called the Southern Reach Trilogy. The Southern Reach refers to the location (somewhere down on the US coast) where a strange alien electric-magnetic phenomenon has occurred. It is referred to only as ‘the shimmer’ *cue weird, trippy music*. Natalie Portman plays a cellular biologist whose husband, a US soldier (Oscar Isaac), has returned from a military expedition beyond its borders. All his colleagues have perished and he himself appears a little off by the experience. Portman and a team of other female scientists (Gina Rodriguez (Jane the Virgin), Tessa Thompson (Thor: Ragnarok) and Tuva Novotny (Swedish stuff)) are then recruited by a psychologist, played with adequate vagueness by Jennifer Jason Leigh, to enter back into the anomaly to explore it from a less military angle (for Portman, an answer to her husband’s weirdness). Hurray for female scientists! Wait…why are they are still dressed up and carrying big ‘fuck-off’ weapons like female military soldiers? Oh well, I guess they have to be armed because you know, America and all.

The set-up is all well and good and there is a decent suspenseful build-up to the events that make up the core of the film i.e. when we get to go inside ‘the shimmer’. There is a feeling of unease established early on by the mysterious behaviour of Isaac’s character and the nicely framed narrative where we get to hear a slowly revealing retrospective from Portman’s character. There are also the constituents of a good sci-fi horror here. Garland intelligently borrows elements from other classics such as the grossness of John Carpenter’s The Thing, the slow reveal in Ridley Scott’s Alien, and even more impressively, the general dream-like feel of Andrei Tarkovsky’s Stalker. But there are times too when it attempts to hold its own in terms of the original material it is basing itself on. I believe there are varying degrees of success here.

The thing is that the Southern Reach novels are obviously from a high calibre author’s hand. They are original and are not related to an already established universe. This makes Garland’s film a welcome work of mainstream science fiction that is not a reboot, a prequel or a sequel. For that he should be commended. Garland has form in writing and directing too. His made his debut in directing  Ex Machina (2015) – a taut, subtle, brilliantly acted and evocative piece about artificial intelligence. Before that, he had given excellent screenplays to Danny Boyle for 28 Days Later (2002) and Sunshine (2007), and also an acclaimed novel called The Beach (you might remember that one). Full-blown acclaim is not exactly what Annihilation deserves though. For me, here is yet another film of so much more potential let down by over-complicated story-structure and uneven visuals. At times, everything makes sense and feels like it is going in a coherent direction but then there is a cut to a scene that feels ragged and out of place. The standard of the visuals drop off in quality without any explanation towards the end.

Indeed, these issues most likely resulted from an unwillingness shown by its principal bank-roller, Paramount, to fully engage in the film’s true potential. The fact that Paramount producers wanted the film’s narrative to be less complicated and Portman’s character to be less intellectual explains a lot about the lack of sensibilities or vision in the American film industry. It could not have been timed worse either with the current proliferation of the #metoo movement. When you consider that they wanted Portman’s character to appeal to the audience sexually rather than intellectually, it feels despairing, doesn’t it? This type of mindset in the film industry is just disgusting. But then again, not at all surprising when one sees the male-heavy credits in almost all of the mainstream Hollywood productions. Thankfully, Scott Rudin (the vintage producer of retro) called bullshit on this and had Garland take control of his work more wholly. Some of the funds I believe may have been cut from the post production as a result, as it would appear that some of the visuals look like they could have been manufactured on free, open source software. No joke.

Annihilation may have raised eyebrows because, despite an expensive budget, it was released in many countries as a streaming option – it did get theatrically released in the US, but after a relatively poor showing at the Box Office within the first few weeks, it was palmed off to those lowly creatures at Netflix, where it now sits in a very likely position to become a sleeper success that will eventually lead to much-anticipated sequels. Not that I am really anticipating it. Apart from occasional trippy and genuinely disturbing moments, this was not exactly a show-stopper.

One thought on “The Two Reviews: The Death of Stalin and Annihilation”